I had a chance to share Curious George with the 1st grade at the Mayo Elementary school in Holden, MA, my daughter’s class. My children love to share that their dad drew Curious George (I was Art Director for The Continuing Adventures of Curious George for Houghton Mifflin, Co. in the late 1990’s). So I get to share my experiences from time to time and help kids have new experiences thanks to George. It was a large group of kids, bigger than I was expecting and I read one of the books I art directed, Curious George Makes Pancakes. I always like having the kids finish the phrase, “This is George. George was a good little monkey, but always…” and they say CURIOUS! It always works to bring out the smiles and get them involved. 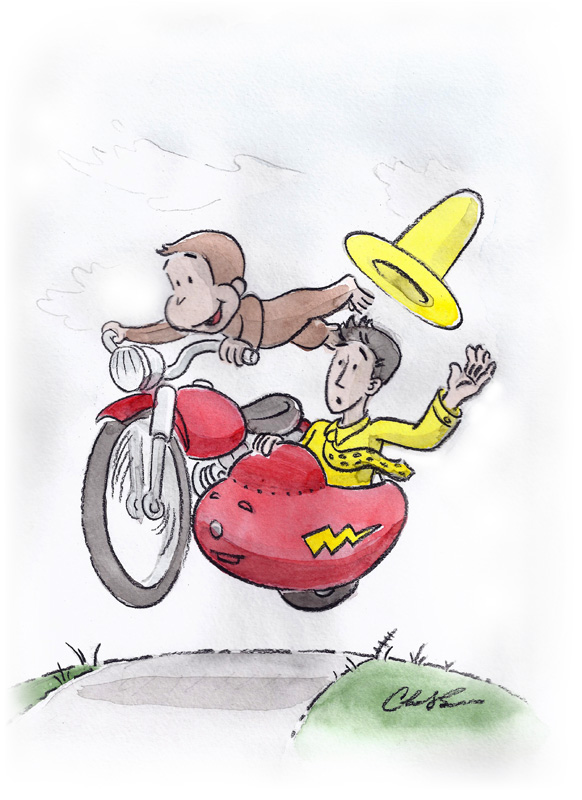 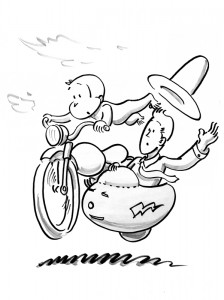 After the story, I told them that illustrating is a wonderful thing to do, sometimes it’s hard work, but I’m blessed to do work that I enjoy.

I then told them that they were going to help me make an illustration. We talked about how we would like to see George and some little boy said that it would be cool to see him on a motorcycle. There were lots of other ideas, even George doing ballet. After about 20 ideas, I asked my daughter’s teacher which idea she liked best. She picked the motorcycle idea. I had never drawn George on a motorcycle; I had drawn him on a bike, but never a motorcycle. So I sketched out the idea real quick and one of the teachers suggested we add a sidecar with the Man in the Yellow hat. Great idea! So I blocked it all in. I then turned a page and traced a much cleaner version, all the while talking about what I was doing and what I was thinking. That’s pretty tough. Anyway I got done and I think they all liked it.

It was real fun visiting with these kids and I look forward to doing again someday. I fondly remember my times at Vipah Interactive, in Wellesley, MA and the time I spent working with those other artists and engineers making Curious George books, CD titles, and other products. They were good times!

Later, I made a color version to give to one of the kids, Alessandra. She sent me a collection of several Curious George drawings, so I had to send something back. I colored it with traditional watercolor and charcoal, framed it and sent it to her. I saw her and her mother at the zoo during a school field trip and they were very excited to have received it. Curious George lives on!

Curious George sketches with the kids at Mayo Elementary School
Recently, I was able to share my illustration skil...
Corporate Video with 3D Animation
CHALLENGE: Ocular Therapeutix, Inc. needed a video...
Character Sketch - Peter Dinklage
Having some fun.
British Soldier with Bearskin Hat and Something Unexpected
I've always had an interest in the kind of hats th...

The work Becker Design Studio has done for my business has been one of our best, most critical investments and it pays for itself everyday!

Becker Design Studio is very responsive. The requirements for our projects are fairly fluid and Becker Studio makes even the difficult tasks seem easy.

We recently worked on a rehabilitation algorithm chart and BDS created a product that we’re all excited about. The quality is incredible and they were able to deliver on time and within budget which is hugely important especially with a clinical trial!

You can expect top-notch work and extraordinary attention to detail from BDS on every project.

Chris uses the latest tools of Adobe so your work is easily printed across various printers (web based or local printers); this is highly important as we learned because not all designers utilize the most current tools causing the business to have to make adjustments and pay more to print with different printers. With Chris designing our material, we have been able to switch printers to save material cost while not having to pay to have the material redesigned to fit the printer.

We’ve been relying on Becker Design Studio for web design, online marketing, print collateral, and assorted projects since 2009. Chris Becker is more than a vendor — he’s a trusted friend who always goes out of his way to make sure our team and our clients are happy with the final product. I can’t say enough about the level of dedication, professionalism, and follow-through that we get from BDS every time.

BDS is reliable, easy to talk to, and transparent in their work! I love working with BDS and how easy they make the design process from start to finish.

I have personally built a relationship with BDS where I trust not only their design input, but that they will deliver exactly what I need. More often than not, I have a design in my head that I can’t necessarily explain and BDS always seems to make that a realization! We really collaborate on new designs and I’m always involved in the process so there are never any surprises when it comes to cost or the final product.

We are thrilled to continue this collaboration and to work together towards bringing PanTher products through FDA clearance and into the clinic.

The custom website that Becker Design Studio created for us has been one of our best and most critical investments and it pays for itself everyday!